An Interview with Gary Kelley 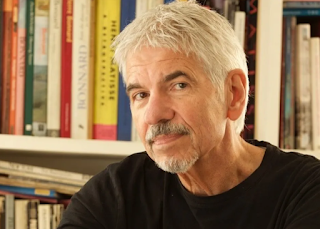 Gary Kelley is an artist and illustrator who has recently published his first graphic novel, The Moon of the Snow-Blind (Ice Cube Press) about the event known as the 1857 Spirit Lake massacre. Kelley will be the featured reader at the Final Thursday Reading Series on November 18 (**one week early due to Thanksgiving) at the Hearst Center for the Arts. The in-person event starts off with a creative writing open mic at 7:00. Gary Kelley takes the stage at 7:30. The 7:30 featured reading will also be live Zoomcast. Click HERE to register for the live Zoomcast.
This interview was conducted by Alexus Williams.
Alexus Williams: What inspired you to write this graphic novel? How did you decide to turn this story into a graphic novel rather than a conventional novel?
Gary Kelley: I grew up with that story and mostly in Algona, Iowa. So I grew up hearing about the story of Spirit Lake and Iowa history. Then there’s my uncle who taught me how to draw and was an art student in Minneapolis. He also had a lot of books on his shelves, and that’s where I found Abby Gardner’s autobiography. I also lived close enough to the Iowa great lakes and, the older I got, the more time I got to spend with family or buddies there. I always loved to get into the history, and I had been around all that stuff since I was a kid. Another thing, the same band of Dakotas as Inkpaduta, actually confronted some settlers in the town I grew up in, in Algona. That gave me even more interest in a story like that. Also, I am addicted to Native American history and Native American culture…that’s why I put that quote about there being two sides to every story in the beginning of the novel, we don’t always get their side of the story.
AW: Could you talk a bit about the title of the book? Does “snow-blind” refer to a person or people? Or is there more to it than that? 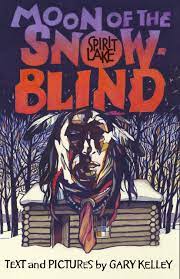 GK: The title came because I was so into Indian history, especially the Plains Indians. I read a couple of books on this story, and they’re usually titled The Spirit Lake Massacre, totally demeaning the Dakotas, but I wanted to show that there are two sides to every story. So, when I was doing some research on the Sioux Indians, I found they had their own titles or descriptions for every month. When I started going through the Sioux Indians and saw that the month of March is the “moon of the snow-blind” (moon of the = month of the, and snow-blind = March, so the title means “month of March”). I just thought that title was a little more interesting than "Spirit Lake Massacre." I wanted to remind people that they had culture too, so I didn’t want mine to have the same title. However, I did think it was important to have “spirit lake” in the “o” in the title on the book’s cover though.
AW: Having read the graphic novel, I noticed that everything is in black and white, is there a reason why you chose to have the story printed as such? If you did not have a choice in the matter (due to publishing costs), would you have chosen to print in color? Do you think color impacts the story?
GK: I definitely thought about that, but I haven’t been asked that before. First of all, I like to draw. I like to draw in black and white, composing in darks and light that black and white will give you. Number two, it would have cost the publisher a lot more money to print 175 of the 180 pages with a lot of colors or full colors. I didn’t think the colors in a story like that meant a lot to justify having them printed in color. I worked on that story off and on and worked on it for a lot of years. A lot of things are intriguing in black and white too—more clean and linear. I would guess that if that were a full color book, it would have to cost another 10 or 15 dollars. I’ve got another one (book) in the works with the same publisher right now, and I keep thinking, “well it would be fun to introduce color into part of the story…” Also, black and white composition, to me—whether it’s that book, or one of the ones in the works now—what really gets me into those stories and telling them visually is that I love to be able to read and see how the images match up and how they embrace the words or prepare you for the words on the next page.
AW: Do you see yourself creating more graphic novels that tell historical narratives? Do you plan on focusing on Iowa history if you do? 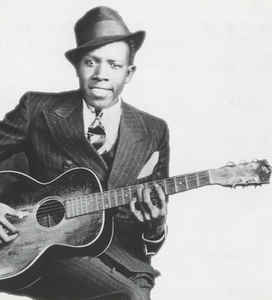 GK: If I was going into Native American history outside of Spirit Lake, I don’t know what I would do. The one I just finished, that’s at the publisher now, has nothing to do with Iowa or Indians or that history. It’s a story I heard on NPR, I heard it the night before Thanksgiving six or eight years ago, and I never forgot it. It was about two famous musicians (Robert Johnson, a blues master from the 30s, and Pablo Casals, a famous cello master from Spain), what really sparked me is that they had these really famous albums recorded the same week in history. I remember NPR talking about how the two musicians never knew each other. I thought it was a terrific idea because those two guys were classic musicians with no connections, but they had these great albums recorded at the same time. I saw this really great biography on Pablo Casals about what he had to deal with in Europe –with Hitler and Mussolini and how that affected him because Hitler hated him. Casals had to be careful to avoid a lot of things that were happening then…and I thought, “jeez, that was really interesting.” The book is titled, Bach and Blues. They (Johnson and Casals) had such dramatic life stories, and each one was so famous in their music and their careers. They had no idea who each other were, but they both recorded their most famous albums the same week in history (third week of November 1936). It’s at the publisher now, and I hope it’ll be out in May. The Waterloo-Cedar Falls Symphony will be doing a concert on that story in May and will have a cello and guitar on the stage. Also, Robert Johnson had to deal with racism down south in the 1930s. It was terrible growing up there and building a career. And Pablo Casals was in Europe, and he hated the Nazis and their culture and Hitler. All of this really made me think this would be a fun story to tell and a good concert–I think it’s only going to be 64 pages rather than almost 200 pages like Moon of the Snow-Blind.
AW: Did you think Moon of the Snow-Blind was going to be as long a story as it turned out to be?
GK: It’s the length it is because of the way I like to tell stories visually and how they match up or support the words on the pages–or how the words support the pictures. I try to make each page interesting to look at, from a point-of-view of each picture and doing my homework, doing my research. Or I find a story like that where I can use a lot of interesting visuals. It lets me go back to how my career started– as an illustrator. So, when I do my book, I can do 180 pages of that, which is really fun.
Posted by Jim O'Loughlin at 08:29