An Interview with Gary Eller 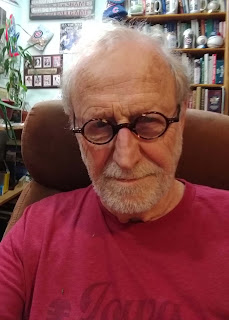 Eller is the author of the novel True North (BHC Press), which is set in the Turtle Mountains of North Dakota. He’s also the author of the short story collection, Thin Ice and Other Risks. His writing has appeared in many publications, and he is the winner of the River City Award in Fiction, the Fowler Prize, and the Minnesota Voices Award, among others.

Eller will be the featured reader at the Final Thursday Reading Series on October 27 at the Hearst Center for the Arts in Cedar Falls, Iowa. The in-person open mic takes place at 7:00 p.m. and Gary Eller takes the stage at 7:30. Eller’s reading will also be simulcast on Zoom Click HERE to register for a Zoom link.

NOLAN ROCHFORD: You grew up in North Dakota, but have now since moved to Ames, Iowa. How has moving away from your hometown and home region affected the way you write about it?
GARY ELLER: I've heard more than one prominent writer advise that distance from the subject or setting—geographic, psychic, temporal, and so forth are necessary before one can write with conviction. I agree. I think these conditions help us achieve a certain detachment that allows us to reach into ourselves for a clear understanding of what happened and what we are dealing with. Certainly, the projection of an appropriate verisimilitude is vital, but that is something that does not come from within. Consider the work of nonfictionalists. Newspaper stories, no matter the writing skills of the reporter, are bereft of reflection—and necessarily so. Quality magazines and other periodicals such as the New Yorker can offer more background and a deeper look. But it is in the works of biographers such as David McCullough and the studied interpreters of our culture such as Joan Didion that we must look to for anything like a complete accounting of a matter. 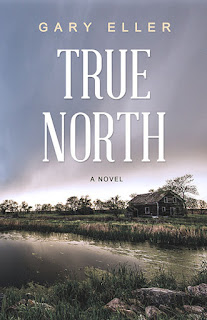 NR: True North visits the perspectives and memories of several different characters. Of them, which is the one you enjoyed writing most, and why? Is there any that you found particularly difficult to write, and why?
GE: I enjoyed Dolores, the six-times married retired prostitute (as did, apparently my readers considering their remarks). The bizarre unlikelihood of such a character making her way late in life coming from a metropolitan area to find (a kind of) contentment in a rural, conservative location is extreme. It is a lucky writer who comes upon this arrangement of circumstances. Beyond this, Dolores offers a quality of levity usually vital in a traditionally rounded story. In the case of True North this is especially so as the novel tends to be fairly grim. One reviewer called it “a beautiful aching book.” That pleased me very much.

The one that gave me difficulty was Richie Lee Peavey. Maybe since he really didn't know who he was, I didn't either. Like most people he was a mixture of good and bad. It's just that he took equivocation to an extreme. Incapable of introspection, Richie Lee could only react.

NR: Many of the sections in Truth North discuss family and the boundaries within it. When you were writing the book, was this a conscious theme you wished to explore or was it something that emerged in the writing?
GE: I did not plan it as a conscious theme. It just seemed to grow from its existence and from the nature of the characters involved. James Salter, a former teacher of mine, said that if you set out to create an individual you will have a character, but if you attempt to create a generic character you’ll have nothing. Family is the first unit to which a human being experiences allegiance. When that allegiance is threatened by attraction to a power outside it the result is characterized by inner conflict and painful choices. When Harold Peavey decided to refuse to take the step forward he knew there would be personal repercussions. While he was living alone at the time, he still belonged to a particular unit in the form of friends, employers, and people who were close to him who expected him to behave in a certain way. A more personal factor: I didn’t object to the events of Vietnam while they were ongoing partly because my attention was devoted to a tough curriculum in pharmacy school during the violent later peak of that war. Now I regret it. I lost dear friends including my college roommate and in a way I feel as if I abandoned them. Injecting myself into the character of Harold Peavey scarcely makes up for this, but somehow in revealing what I wish had been my attitude all those years ago makes me feel a little better. Thus I've been a protestor forty or fifty years too late. 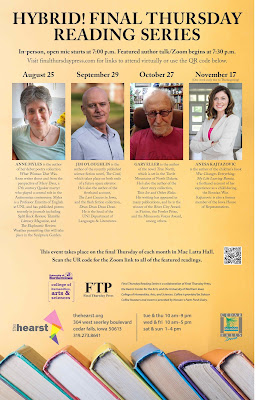 NR: A large part of your novel is dedicated to the discussion of war and the way it interacts between generations, with both characters struggling to come to terms with their draft duties in two different wars. Why did you choose to include these struggles in the writing of True North?
GE: This is also an instance where the personal intrudes with the make believe. Remarkably, discussion of great events was almost never discussed around my family's dinner table. My father was rejected for the military for physical reasons while I managed to run out the clock by staying in school. I can only guess what his attitude was about Vietnam. My guess is that because we lived in a patriotic and fundamentalist community he would have wanted me to serve if for no other reason than to maintain appearances. Though a complicated and compromised pacifist by nature, I see in my vivid memories of the sixties, a reflection of our society today with opposing factions both claiming the moral high ground, and to some extent each doing so with some justification. Historically, we see this has happened often—maybe continually—through the ages. It would not take a cynic to equate the history of humankind with the history of war.

NR: In the past, you’ve published short stories and your collection, Thin Ice and Other Risks. What are you working on now? Any plans to revisit the Turtle Mountain region in your writing?
GE: I’ve had readers say they'd like to see a sequel to True North. I did leave the precise fates of certain characters open to eventual resolution—Sam Morinville, Vickie Breen, and others. But I'm not actively working on a project like that. (I've had feelers wondering about a film for the book which is keeping my attention on True North.) Evoking the first question of the interview, I'd like to point out that I lived in Alaska for several years and now that I'm entirely separated from that state, I find myself thinking about story lines. Also, I'm a fan of baseball and the game's history. I have ideas for novels and some research roughed out on both these topics for when the time comes.